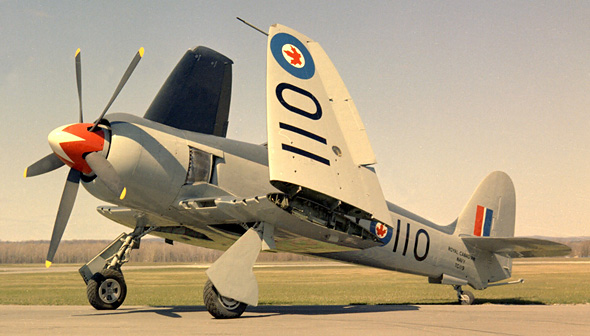 The Hawker Fury was designed as a smaller and lighter version of the Hawker Tempest. The Sea Fury was the naval version, with folding wings and tail-hook . The Sea Fury FB.11 was a fighter-bomber capable of carrying bombs and rockets under its wings. Most of the 860 Sea Furys built went to the Royal Navy, including 60 Mk.20 two-seat trainer versions. The RCN’s 74 FB.11s were based on shore and on the aircraft carrier HMCS Magnificent. Sea Furys served with the RCN until they were retired in 1956.

The Sea Fury was one of the fastest piston-engine aircraft built; as a result, some surplus Sea Furies were used successfully for open-class air racing. Others have been restored to original flying condition and are frequently seen at airshows both in Europe and North America.

This Sea Fury was manufactured by Hawker Aircraft Limited in Kingston, United Kingdom in 1948. It was accepted by the RCN in May of that year and shipped to Canada aboard HMCS Magnificent.

Starting in 1949, it served with No. 883 Squadron, later known as VF 871, at HMCS Shearwater a land base in Dartmouth, Nova Scotia. The Sea Fury was damaged in 1954 and repaired by Fairey Aviation Company of Canada Limited. Retired from service, it was deemed surplus and sent to Crown Assets until 1956, when it was purchased by Bancroft Industries Limited of Montreal.