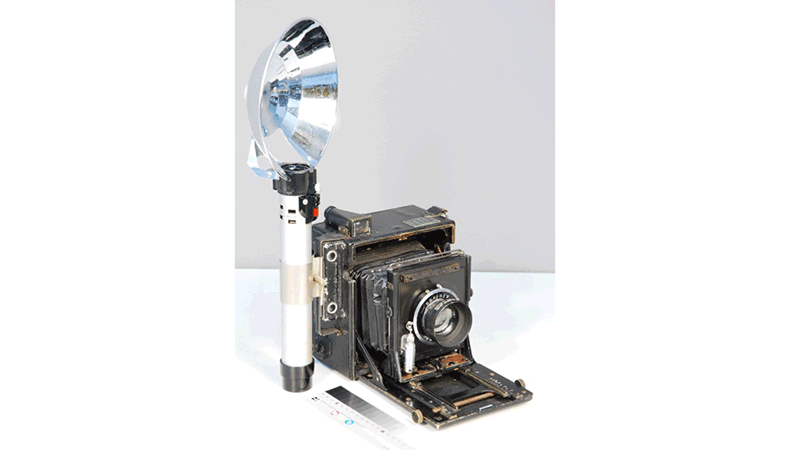 This camera belonged to Ottawa news photographer Victor Albota. Posted to the Royal Canadian Air Force Film and Photo unit during the Second World War, Albota began his civilian career with the T.V. Little Photo Company in Ottawa in 1945. He later took on newspaper assignments for the Ottawa Journal. His wife donated his camera to the Museum in 1996. As a working tool, this camera was used intensively. When it came to the Museum, it showed multiple traces of wear and tear. Conservators removed the visible green corrosion between leather and copper alloyed fittings and cleaned the soiled areas with alcohol, as well as fixing some detached parts with epoxy adhesive.

Introduced in 1912, the Speed Graphic camera was designed for glass plates or sheet film. This allows single exposures to be removed and immediately processed, rather than waiting until an entire roll of film is exposed. To produce shutter speeds fast enough to stop rapid motion, the Speed Graphic uses a focal plane shutter, a flexible “roller blind” with a narrow slit that moves rapidly across the front of the plate, briefly exposing it to light from the lens. The Speed Graphic produces a relatively large negative, usually 4 x 5 in. (approx. 10 x 13 cm), that requires little or no enlargement for newspaper use, resulting in crisp, high-resolution prints.

Anyone who has watched a 1930s movie showing newspaper photographers at work will recognize a Speed Graphic camera. Offering far greater accuracy than any other camera of the era, the Speed Graphic could take pictures of rapidly moving objects, which is the reason it was preferred for both news and sports photography. It was the standard press camera of the mid-twentieth century.