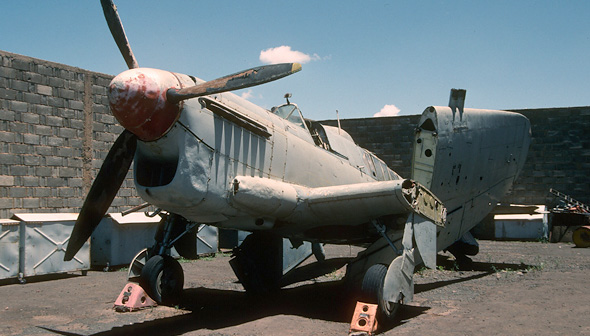 The Firefly was one of the most successful British carrier based aircraft designs of the Second World War. The Royal Canadian Navy (RCN) used the Firefly in addition to the Supermarine Seafire and Hawker Sea Fury onboard its carriers HMCS Warrior and HMCS Magnificent during the early post war period. The Firefly FR 1 served as a fighter reconnaissance and training aircraft and later versions were used as antisubmarine aircraft. The RCN acquired more powerful Mk. 4 versions which were eventually upgraded with new equipment to become the Mk 5. The Firefly was retired from RCN service in 1951 and all serviceable aircraft were later sold to the Ethiopian, Danish and Dutch armed forces.

During the Second World War, the Firefly saw action mainly in the Far East and Pacific theatres. Its first operations however were carried out in Europe where it made armed reconnaissance flights and anti-shipping strikes along the Norwegian coast. The Firefly also participated in Fleet Air Arm attacks on the German battleship Tirpitz, and aided in its eventual destruction. The Firefly joined the British Pacific Fleet and carried out attacks on oil refineries and airfields, and gained fame when it became the first British designed and built aircraft to overfly Tokyo. The Fleet Air Arm again used the Firefly during the Korean war in support of land operations.

Donated by the government of Eritrea

This Firefly was manufactured in 1945 by General Aircraft Limited in Hanworth, Middlesex, England. It was accepted by the RCN in November 1946 and taken on strength by No. 825 Squadron. In May 1947, it was transferred to No. 826 Squadron and served for the next two years in Nova Scotia and Manitoba, as well as on HMCS Warrior and HMCS Magnificent.

In September 1949, the Firefly's undercarriage collapsed. After being repaired by the Fairey Aviation Company, it was stored until 1954, when it was sold to the Ethiopian Air Force. The aircraft's career in Ethiopia is unknown.

In the early 1990s, a Canadian military attaché spotted the Firefly, along with a few others, in open storage on an air base at Asmara, Eritrea. In 1993, a few weeks after Eritrea became independent, its new government negotiated with Canada to trade two of the derelict Fireflies for food and medical supplies. The aircraft were dismantled and flown to Canada. One was brought to the Museum, while the other went to the Shearwater Aviation Museum in Nova Scotia. This Firefly arrived at Rockcliffe airport in October 1993.