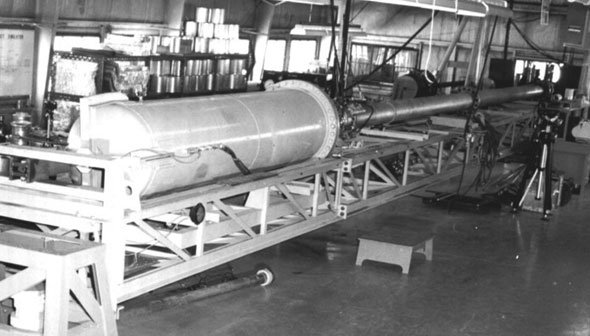 Canada’s second fully operational flight impact simulator was used to test the strength and safety of aircraft components such as windshields and engines against high-speed bird impacts. To some extent, this 10-inch gun is based on an earlier device operated by the Royal Aircraft Establishment at Farnborough, England. It has a 40-foot smoothbore stainless steel barrel and can be taken apart for storage or transport. The 10-inch gun could fire fully feathered two-kilogram birds at speeds of up to 1,400 km/h. It was in operation for over forty years from 1968 to 2009.

The original idea behind the 10-inch gun was that Canada’s main aircraft makers, Canadair and de Havilland Aircraft of Canada, would bring this device to their factories, in Cartierville, Quebec, and Downsview, Ontario, to conduct their tests. The various parties realised early on, however, that the proper operation of this device required a great deal of expertise and support equipment. As a result, the flight impact simulator was permanently located in the Flight Impact Simulator Facility at Uplands, in Ottawa. Canada’s expertise in bird-strike testing is recognized around the world.