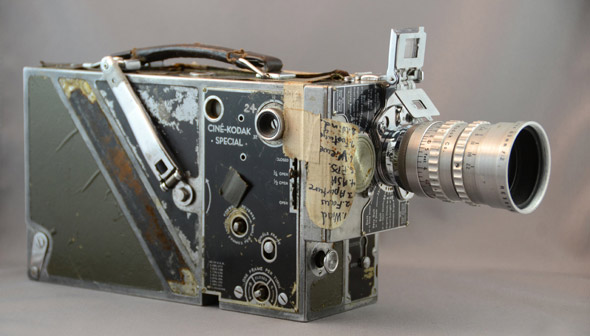 With this battered and patched Ciné-Kodak Special, filmmaker and canoeist Bill Mason (1929–1988) created powerful and lyrical images of the Canadian wilderness. The camera shows Mason’s liberal use of duct tape and white hockey tape for quick repairs and modifications. Note the handwritten operating instructions, taped upside down to the left of the lens.

Introduced in 1933, the Ciné-Kodak Special was intended for advanced amateur cinematographers but it quickly became popular among professionals making 16-mm films for non-cinematic audiences. Its advanced features included a reflex viewfinder for framing, an adjustable rotary shutter to execute fades, an eight-frame film crank to facilitate multiple exposures and dissolves, and a single-frame film advance for animation and time-lapse photography. The camera was equipped with 100-ft. (30.5-m) film magazines that could be changed at any time, and its two-lens turret allowed easy changes in focal length for different shots. For Bill Mason, the Ciné Special was well suited to point-of-view, action shots in foaming rapids or on storm-buffeted lakes. It was robustly built and, being spring-driven, there were no batteries or other electrical parts that could get wet.

Bill Mason made most of his films in association with the National Film Board of Canada (NFB). A government agency established in 1941, the NFB supported the production of many award-winning documentaries, educational films, and works of animation.