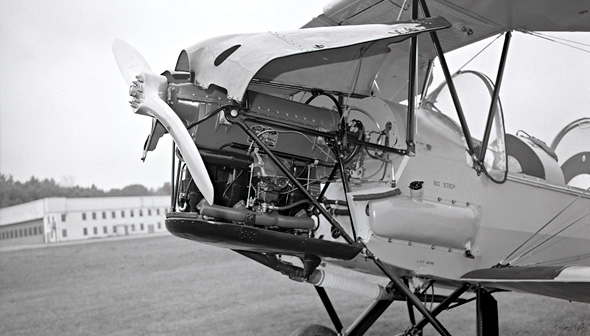 In the event that U-boat attacks caused a break in supply of British-made engines to Canada, American-built Menasco engines were installed in some Canadian-built Tiger Moths. This is the major difference between the Menasco and Tiger Moths. Because this engine could drive a large generator, most Menasco Moths were used for radio training.

The Menasco engine was not as powerful as the Gypsy engine, resulting in a somewhat reduced performance. This loss of power made the Menasco Moth a less than ideal pilot-training airplane and contributed to the Menasco Moth being used almost exclusively for radio training.

This Menasco Moth was manufactured in 1941, and served as a wireless (telegraphy) trainer with No. 1 Wireless School in Winnipeg. In 1943, it was converted to a basic training aircraft and transferred to No. 5 Air Observer School in Winnipeg. After the war it was placed in storage in Manitoba until 1962, when it became part of the RCAF's historic aircraft collection at Rockcliffe airport.