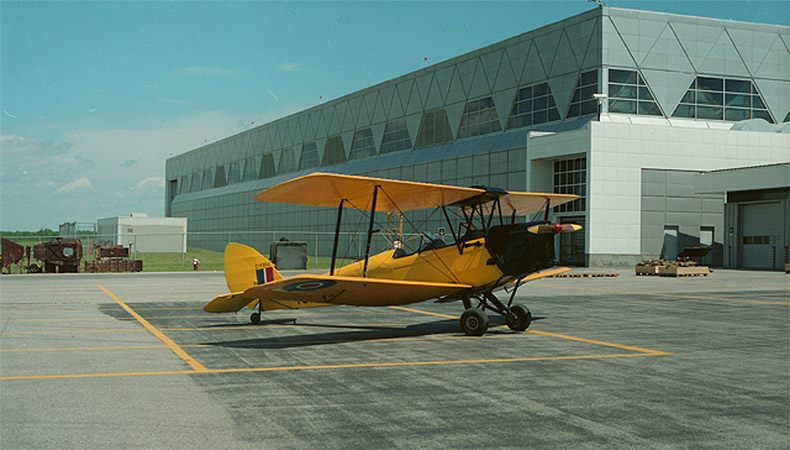 The Tiger Moth was first and foremost a military trainer and was used mainly for elementary pilot training in the British Commonwealth Air Training Plan . Modifications were made to the basic design to adapt it better to Canadian conditions. Many Canadian Tiger Moths were sold as war surplus and some are still flying in the 1990s.

Canadian-built Tiger Moths were modified by adding wheel-brakes, a tail-wheel, a stronger undercarriage with the wheels set slightly forward, and a cockpit that could be closed by a sliding hood. One of the best known trainers in Second World War, the Tiger Moth was used by the air forces of Britain, Canada, Australia, Brazil, Denmark, Iraq, New Zealand, Persia, Portugal, South Africa, Southern Rhodesia, and Sweden. Many flying clubs were re-equipped after Second World War with surplus Tiger Moths, some of which were bought for as little as $25 (without instruments).

This Tiger Moth was built by de Havilland Canada in 1941. It served with the RCAF until May 1942, when it crashed and was retired from service. In 1943, the damaged aircraft was transferred to the Department of Transport, where it remained until the end of the Second World War in 1945. After the war the Tiger Moth was transferred between several private owners but was never repaired. The Museum acquired the incomplete aircraft in 1962.