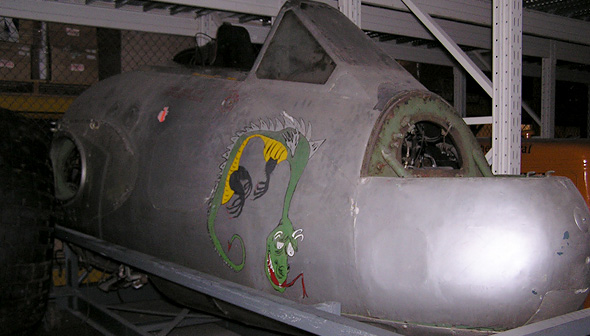 Production of the Vampire started just too late for it to see service in Second World War. This very successful design was produced in several versions and flew with the air forces of more than 15 countries. In 1948 it was the first jet fighter to enter the RCAF. Here, as in other air forces, it introduced fighter pilots not only to jet flying, but also to cockpit pressurization and tricycle landing gear. The last Vampires were not phased out of the Swiss Air Force until the late 1980s.

In developing the Vampire, de Havilland applied its expertise in wood construction to manufacture a fuselage of the same type of plywood/balsawood sandwich used in the Mosquito. The Vampire’s twin-boom configuration enabled the jet tailpipe to remain short in order to extract as much thrust as possible from the somewhat low-powered engines of the day. The prototype Sea Vampire was the first jet aircraft to fly from an aircraft carrier.

The Museum's Vampire I was manufactured in the United Kingdom by the English Electric Company Limited in 1945, and was brought to Canada for cold weather trials. It served with the RCAF before being relocated to the Ontario Science Centre in Toronto. It is the RCAF's only Vampire I, the second-oldest Vampire in the world, and probably the example that is most complete and closest to its original configuration. The aircraft was transferred to the Museum in 1968. The Museum also holds a Vampire 3.