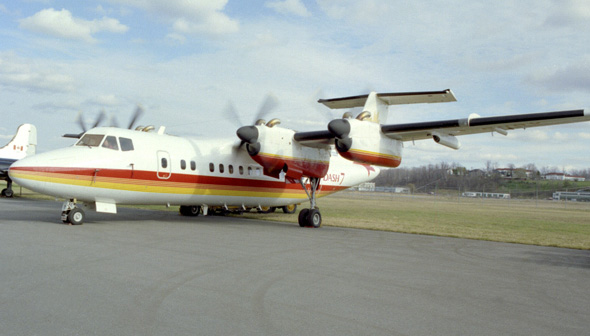 The Dash 7 was the result of many years of research in short-take-off-and-landing technology by de Havilland Canada. It was an excellent airplane, quiet and efficient, but it had the misfortune to debut in the late 1970s between the oil crisis and the 1981 recession when few operators were purchasing aircraft. Nevertheless, its good qualities ensured that 105 Dash 7s were built and sold all over the world. They were found flying in places as dissimilar as Norway and the United Arab Emirates.

Built in 1975, this aircraft is the prototype, or first, Dash 7 to be built. De Havilland Canada used this aircraft for thirteen years as an experimental, demonstration and corporate flying aircraft, donating it to the Museum in 1988.

On October 26, 1988, pilots Ted McLaughlin and Dick Hutton, along with passenger Robert Fowler, flew the aircraft to Rockcliffe airport, on its final flight. McLaughlin was, at the time, de Havilland Canada's chief of training, while co-pilot Hutton was the company's chief liaison pilot. Fowler, a member of Canada's Aviation Hall of Fame, was a retired de Havilland Canada test pilot who had been the first to fly the Museum's Dash 7.