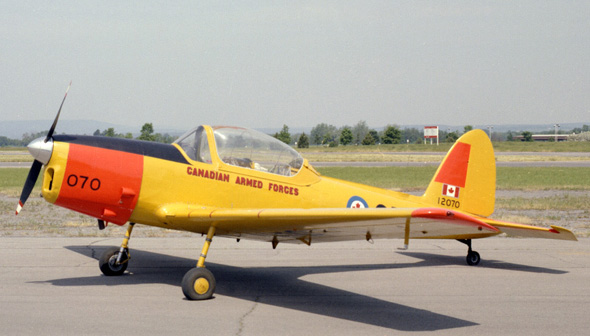 When the RCAF began to expand in the late 1940s, both elementary and advanced pilot-training depended upon the North American Harvard. It was soon recognized that a simpler aircraft was required for elementary pilot-training. The Chipmunk was chosen for this role. Many of the 217 Chipmunks made in Canada went to the RCAF, but Canadian Chipmunks were also sent to Egypt, Lebanon, and Thailand. Britain made 1 000 Chipmunks and Portugal, 66, under licence.

The Chipmunk was the first Canadian-designed aircraft to be made abroad under licence. Some civilian Chipmunks have been provided with more powerful engines to enhance their aerobatic capability and have been used in international aerobatic competitions.

Built in 1956, this aircraft was the 207th Chipmunk built in Canada and was one of the last Chipmunks produced in the country. It was used for training by the RCAF in Centralia and Dunville, Ontario; Portage la Prairie, Manitoba; and Saskatoon, Saskatchewan. This Chipmunk was put in storage in the Aerospace Maintenance Depot Unit in Mountain View, Ontario in 1971 and was purchased by the Museum the following year. It was given the civilian identity CF-CIA for its flight to Rockcliffe airport.