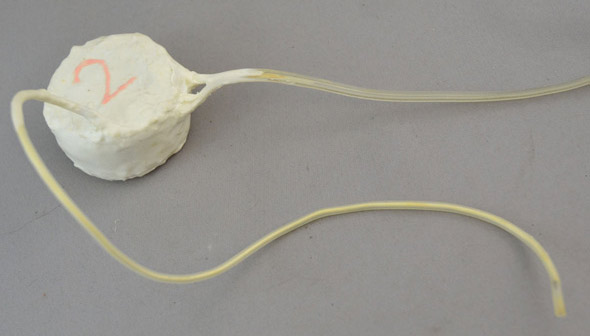 Transfer from the National Research Council in 1985

The limited lifespan of the batteries used in early cardiac pacemakers led researchers to consider what could work as a successful substitute. In 1963, the National Research Council of Canada undertook a research program to determine if the human body could supply power to these technologies. The result was the production of the world’s first biological cardiac pacemaker in 1965. The prototype device generated enough power to stimulate the rhythmic beat of a dog’s heart for 48 hours.

Research and clinical work related to the understanding, diagnosing, and treating of heart disease spanned the nineteenth and twentieth centuries in numerous centres, which resulted in the development of a range of machines and devices. Cardiac pacemakers, for their part, evolved from large electrically-powered and battery-powered machines located outside the body to much smaller, totally implantable, devices.

This pacemaker derived from a combination of surgical and engineering developments following the Second World War. In medicine, surgeons brought back many new techniques from the war; similarly, engineers and scientists in Canada witnessed rapid developments in radar and electronics. In the late 1940s, Toronto cardiac surgeons, Wilfred Bigelow and John Callaghan, developed new cardiac surgical techniques in order to slow the heart for surgery. They engaged Jack Hopps, an electrical engineer at the National Research Council in Ottawa, to design an electrical device to stimulate the heart back to a normal beat. The joining of these two fields of knowledge created the world’s first external cardiac pacemaker in 1951.