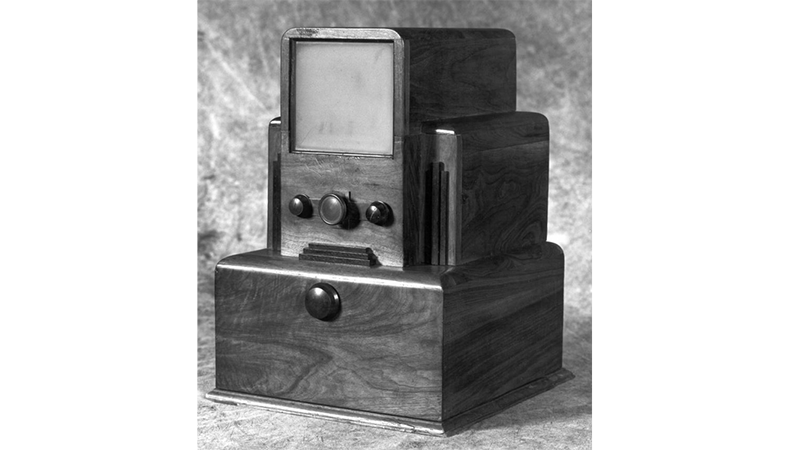 This set was designed by a young electrical engineer, Alphonse Ouimet, for Canadian Television Ltd in 1932. Ouimet joined the new Canadian Radio Broadcasting Commission in 1934 and later became president of its successor, the Canadian Broadcasting Corporation (CBC). This television formed part of the CBC’s historical collection before it was transferred to the Museum in 1969.

Engineer Alphonse Ouimet employed the mechanical scanning method that had been made famous by John Logie Baird in Britain and Charles Francis Jenkins in the United States. Both the Baird and Jenkins interests, in fact, owned shares in Canadian Television Ltd. As now, television in the 1930s depended on a scene being rapidly scanned in a series of lines that, when reassembled on the screen of a receiver, gave the illusion of a complete image. The entire scene had to be scanned more than 12 times per second so that the viewer would perceive the changing series of still images as a single moving picture. Mechanical scanning usually incorporated a Nipkow disk, a circular plate perforated by a series of holes laid out in a spiral pattern. As the disk was spun in front of an illuminated subject, one hole after another swept across an adjacent segment of the scene. Light reflected by the subject passed through the hole to strike a photoelectric cell behind the disk, producing a varying electrical current. In the receiver, this current controlled a lamp, which passed light through the hole of another spinning disk and retraced the original light pattern on the back of a translucent viewing screen. Like most televisions employing the Nipkow disk, Ouimet’s receiver produced a small faint image. Because it scanned only 60 lines (unlike the modern standards of 720 or 1080 lines) it could not show fine detail.

The fashionable art deco cabinet of this production prototype reflected the ambition of Canadian Television Ltd. to market the set as a luxury, “high tech” consumer item, despite its technical limitations. Montreal’s CKAC radio station began regular, live, experimental television broadcasts in 1932, although at this time only a handful of people had built or bought receivers to view them. Canadian Television Ltd. was unable to raise the funds to begin building sets and soon went out of business. CKAC suspended television broadcasts in 1933.