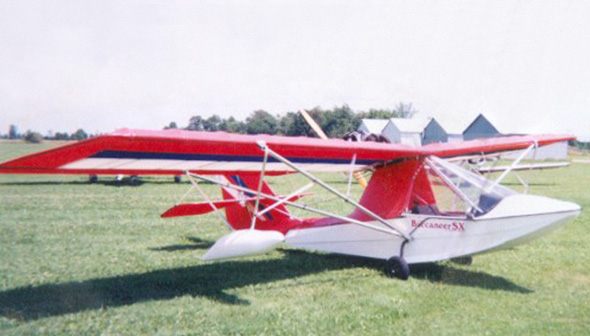 The modern ultra-light movement that began during the late 1970s was a direct consequence of the product liability costs affecting the general aviation industry at that time. The escalating cost of small private aircraft made them unaffordable to many who wished to take up recreational flying. With the growth of the ultra-light aircraft movement, a cheaper alternative became available. Today, ultra-light pilots may well be the fastest growing group of aviators in Canada.

The Buccaneer was one of the first ultra-light amphibians made available to the recreational flying community. An amphibian aircraft is capable of taking off and landing on either land or water. On the Buccaneer, a small retractable landing gear is mounted in the hull for land operations; this gear is retracted when the aircraft is operated from water and a pair of wing-mounted floats gives the aircraft stability.

This Buccaneer SX was assembled in 1992 from a kit manufactured by Advanced Aviation Incorporated of Orlando, Florida and purchased through the company's Canadian distributer, Buzzman Enterprises Incorporated, of Holland Landing, Ontario.

During its career, the Buccaneer SX was flown primarily at Winchester, Ontario (in the Ottawa area) by its owner, Arleigh Vincent. The aircraft was dismantled and then stored at Winchester airport until Vincent donated it to the Museum in 2003.