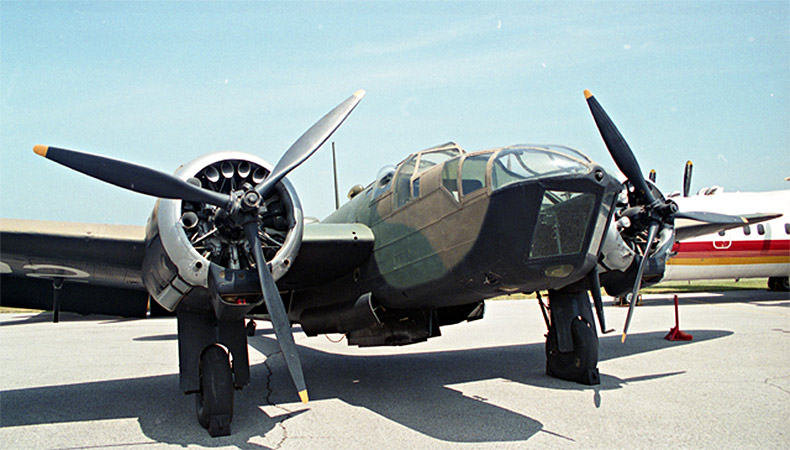 The Bolingbroke was a Canadian version of the Bristol Blenheim IV light bomber, which in turn had been developed from the civilian prototype Bristol 142. Although begun in England, the Bolingbroke name was dropped, except in Canada where they were built at Fairchild Aircraft Ltd. There were three versions made, including a floatplane (only one was built). After early RCAF service on coastal patrol, Bolingbrokes served through the war as bombing and gunnery trainers and as target tugs in the British Commonwealth Air Training Plan .

Production of this aircraft, with its modern, stressed skin design, initially caused some difficulty for Canadian workers, who had no previous experience with this type of construction. Following the war, some Bolingbrokes were sold as war surplus. Thirteen are known to be in museum collections around the world.

This Bolingbroke was manufactured by Fairchild Aircraft Limited for the RCAF in June 1942, and was briefly listed with No. 1 Training Command in Toronto before going to No. 2 Training Command in Winnipeg in July. In June 1944, it was put in storage and in September 1945 it was sold as war surplus to George A. Maude.

Maude moved the Bolingbroke to his property on Salt Spring Island, British Columbia. In 1962, he agreed to donate the aircraft to the RCAF. A Calgary company disassembled and trucked it to Alberta for restoration in May 1963. It was finished in the markings of an aircraft of No. 8 Squadron RCAF, which had used Bolingbroke IVs operationally on both coasts from 1941 to 1943. The aircraft was transported to Rockcliffe airport and officially handed over to the RCAF by Maude in an Air Force Day ceremony on June 6, 1964. The aircraft was later transferred to the Museum.