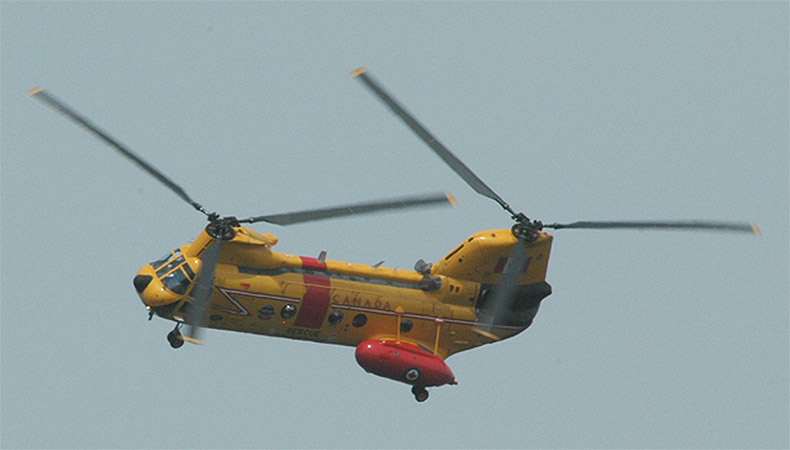 This aircraft is a twin-engine, tandem-rotor search and rescue (SAR) helicopter used by the Canadian Forces from 1963 until 2004. It was a variant of the Boeing Vertol CH-46 Sea Knight designed and built in the United States. A search and rescue version was purchased by the Royal Canadian Air Force in the early 1960s and became known as the Labrador. Soon after, the Canadian Army acquired a troop and cargo version known as the Voyageur. In the mid-1970s, these army machines were replaced by CH-147 Chinook heavy lift and transport helicopters and the Voyageurs were transferred to the air force when Air Command was formed in 1975. They joined the Labradors on search and rescue duties and all were modified to a common search and rescue standard.

Donated by the Canadian Forces

This Labrador was manufactured for the RCAF in 1963 by the Boeing Company's Vertol division in Morton, Pennsylvania. It was the first Labrador used by the Canadian military. Its entire career was spent as a search-and-rescue (SAR) helicopter. Taken on strength in September 1963, the Labrador went to No. 102 Composite Unit in Trenton, Ontario, which became No. 424 Squadron in 1968. Severely damaged by fire in July 1969, it was repaired and returned to service. The Labrador was part of a detachment moved to Torbay, Newfoundland in 1977. This detachment became No. 103 Rescue Unit when it moved to Gander, Newfoundland later that year. The Labrador went back to Trenton in the early 2000s.

The last Canadian Forces Labrador to serve, it was retired in 2004. The Canadian Forces' donation of the aircraft to the Museum in July 2004 was an event that marked the retirement of the Labrador fleet.