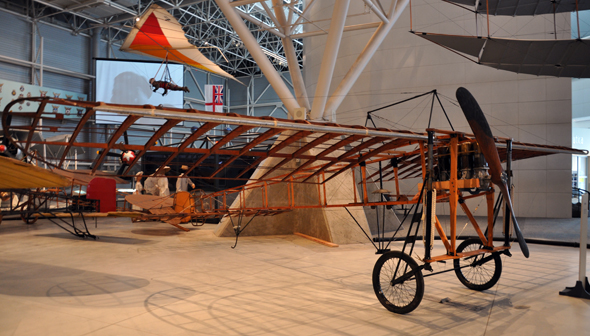 Although it looked fragile, the Bleriot XI was structurally strong and had considerable modification potential. It was the first aircraft put to military use by France and Italy in 1910 and subsequently by Britain in 1912. At the start of First World War, the French air force contained eight squadrons of Bleriots and the Royal Flying Corps flew several in France with the expeditionary force. The Italians had Bleriots when they entered the war. A total of 132 were built in five versions.

On July 25, 1909 “England’s isolation ended once and for all” when the aircraft designer Louis Bleriot flew across the English Channel in a Bleriot XI. Lateral control was effected by wing warping and by having the main undercarriage wheels castered so that the aircraft could crab in a crosswind on the ground. This device made all operations on the ground very interesting. The Bleriot XI was the first aircraft used in war when it was flown by the Italian air force during the Italo-Turkish war of 1911.

The Museum's Blériot was built, from locally-available plans, by California Aero Manufacturing and Supply Company (San Francisco) in 1911, for John W. Hamilton. It is believed to be the first California-built airplane to fly.

Following a series of accidents, the aircraft was placed in storage in 1911. James Nissen and J. Mathiesen of San Jose, California purchased it in 1953. Between 1953 and 1971, the aircraft was partially restored and was displayed at several air shows across Southern California. The Museum acquired it in 1971.