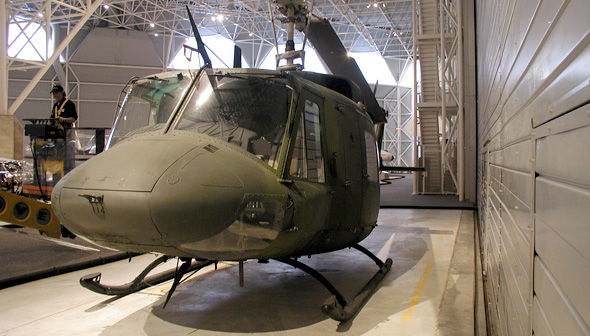 The aircraft nomenclature system introduced by the U.S. Army during the 1950s included the letters HU, which stood for “helicopter utility”. From this, the famous but unofficial nickname “Huey” was derived for the Bell UH-1 Iroquois as the Twin Huey. An American design, it was developed to Canadian specifications and utilized Canadian-built turbine engines. Entering armed forces service in 1971, it has subsequently been purchased by military and civilian operators worldwide. Production was transferred to Bell Textron Canada Ltd in 1988 and over 900 of the type have been delivered as major exports.

The twin-engine installation is coupled to a combining gearbox and single output shaft that drives a semi-rigid rotor, endowing the helicopter with increased reliability and safety. Used for troop and cargo transport, reconnaissance, medical evacuation and search and rescue work, the Twin Huey was replaced in 1996-97 by the newer Bell CH-146 Griffon helicopter.

This CH-135 was manufactured by Bell Aircraft Corporation, at Forth Worth, Texas in 1971, and was taken on strength by the Canadian Armed Forces that same year. It served throughout Canada until the CH-135s were phased out of service in 1997. One of the highlights of the helicopter's career was its use in search and rescue operations in Goose Bay, Labrador in the mid-1970s.

Of the 50 Twin Hueys operated by the Forces, this example was among those that had flown the most hours.

This helicopter was stored in Trenton, Ontario after it was retired from service, and was donated to the Museum in 1998.