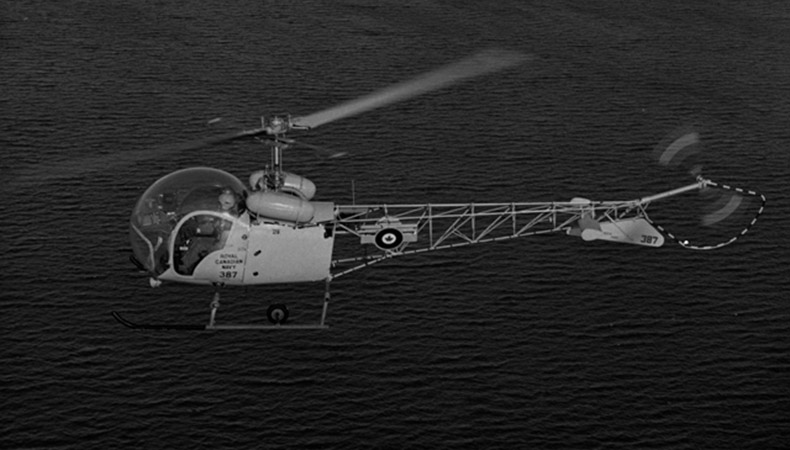 In 1946, the Bell 47 became the first helicopter to be licensed for civil operation. In January 1947 it was the first commercial helicopter to be delivered to an operator. Production for civil and military use continued until 1973. The Bell Model 47 performed light helicopter roles such as training, surveying, spraying, transport, search and rescue, and police patrol. It is probably the most successful helicopter ever built, with many still in use until the early 1990s.

The crew sits side-by-side under a large clear-vision bubble at the front of the aircraft. Because these bubbles were “free-blown” no standard shape resulted. The differing bubble-shapes sometimes caused flying characteristics to vary slightly among aircraft. For search and rescue, the HTL-6 was fitted with two external wire-mesh stretcher carriers.

This HTL-6 helicopter was manufactured by Bell Helicopter in Fort Worth, Texas in 1955, and began service with the Royal Canadian Navy in June of that year. It served with Royal Canadian Navy helicopter squadron HU-21 at the land base HMCS Shearwater in Dartmouth, Nova Scotia, where it performed pilot training and utility operations for the fleet. It later served on the icebreaker HMCS Labrador, which carried out resupply, survey and ice-breaking functions in the Canadian Arctic. It was transferred to the Museum in October 1966.