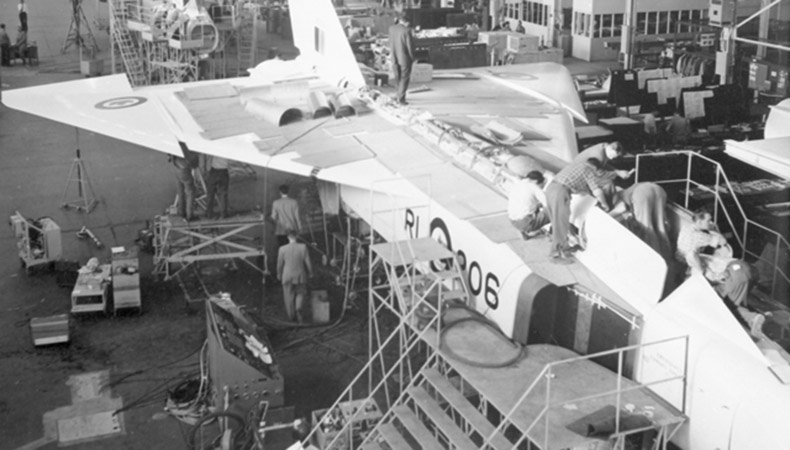 Intended to replace the Avro Canada CF-100, the CF-105 Arrow was a technical masterpiece at the forefront of aviation engineering during its time. The Canadian government believed, however, that the manned bomber threat was diminishing and that air defence could be better handled by unmanned BOMARC missiles. The contract was cancelled on February 20, 1959 while test flying was still in progress. By then five Arrows had flown. The government ordered all completed Arrows, related documentation, and equipment destroyed.

Sleek, elegant, and the stuff of mythology, the Avro Arrow is still alive in print and in memory. The Arrow met most of its performance requirements while flying with less powerful engines. One of the Canadian-made Iroquois engine designed for the Arrow was flight-tested attached to the rear fuselage of a Boeing B-47, but never powered the Arrow. At 28 tons, the Arrow was equivalent in weight to its ancient Avro relative, the Lancaster bomber.

Transfer from the Defence and Civil Institute of Environmental Medicine

The Museum possesses the largest surviving piece of an Avro Arrow: its nose section. When the aircraft was disassembled after 1959, this piece was saved for use as a pressure chamber at the Institute of Aviation Medicine in Toronto. The Institute donated the nose section to the Museum in 1965.

Other Avro Arrow components in the Museum's collection include two undercarriage legs, an Orenda Iroquois engine, a Pratt & Whitney J75 engine that was used for test flights, wingtips and other small parts, along with memorabilia.