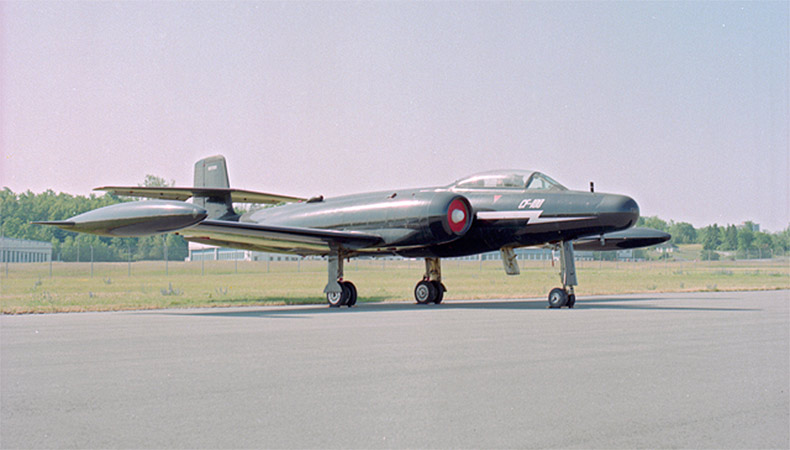 The CF-100 and its Orenda jet engines were designed and built in Canada. As an all-weather interceptor with a long range and powerful radar, it was ideal for northern air defence, and was probably the best all-weather fighter of its time. CF-100s also served in Europe with Canadian and Belgian units. On retirement as fighters, some CF-100s were fitted as target tugs and others were fitted with electronic countermeasures equipment. The last CF-100 retired in September 1981. A total of 692 were built.

Although officially designated the "Canuck", the name never caught on. The CF-100 was known universally in the RCAF as the "Clunk" or "Lead Sled". The CF-100 had good stretch which allowed for potential of equipment and armament upgrades. The Mk.5 had wing-tip extensions added to increase its high-altitude capability.

This airplane has been painted black similar to the prototype CF-100.

This CF-100 Mk. 5 was manufactured by Avro Aircraft Limited in Malton, Ontario in 1958. It was received by the RCAF in August 1959 and served with No. 414 Squadron at Uplands airport in Ottawa, Ontario.

It was then stored for five years in Trenton, Ontario. In June 1964 in Toronto, it was converted to an electronic warfare aircraft to train fighter pilots and radar operators. After conversion, it was returned to No. 414 Squadron, where it remained for the next ten years. During this time it was stationed in St. Hubert, Quebec; Uplands, Ontario; and finally in North Bay, Ontario.

In 1981 the aircraft was painted black to commemorate the CF-100 prototype that had first flown thirty-one years earlier in 1950. In February 1982 the aircraft's final flight brought it to Rockcliffe airport where it was transferred to the Museum. The aircraft has been on loan to the Canadian Warplane Heritage Museum in Mount Hope, Ontario since 1996.