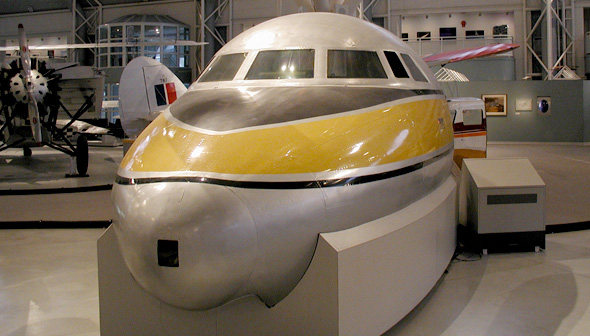 The Jetliner was designed to meet a Trans-Canada Air Lines requirement. It was the first jet transport to fly in North America and the second to fly in the world, 13 days after the flight of the de Havilland 106 Comet. Although somewhat short in range, the design’s great potential was never realized. Further development was stopped by the federal government in 1951 in order to force the company to concentrate on the CF-100 jet fighter. Only one Jetliner was built.

Howard Hughes personally tested the Jetliner for his airline, flying it from his private airfield at Culver City in California. Little was known about jet engines in their early days. An airport manager in New York City insisted that the Jetliner park away from the terminal and had pans placed under the “fire-spitting” engines to catch any dangerous drippings.

The Jetliner was manufactured by Avro Canada Limited in Malton, Ontario in 1949. This prototype aircraft first flew in August 1949, and was demonstrated in Canada and the United States. On one such test flight in April 1950, the Jetliner flew from Toronto to New York, landing to much fanfare and attention from the American press after carrying the world's first jet airmail. However, it never carried paying passengers.

In December 1951 development of the Jetliner program was stopped. Despite this, Avro Canada continued to fly the Jetliner for some time.

In 1956 Avro Canada offered the aircraft to the National Research Council (NRC) in Ottawa for research. Only the aircraft's nose and some engines were kept, due to lack of space. The rest of the aircraft was sold for scrap. The main wheels ended up on a farm wagon and the autopilot was used for many years in a Douglas DC-3.

The Museum now holds the nose section of the C-102 Jetliner prototype. It was donated to the Museum by the NRC around 1967.