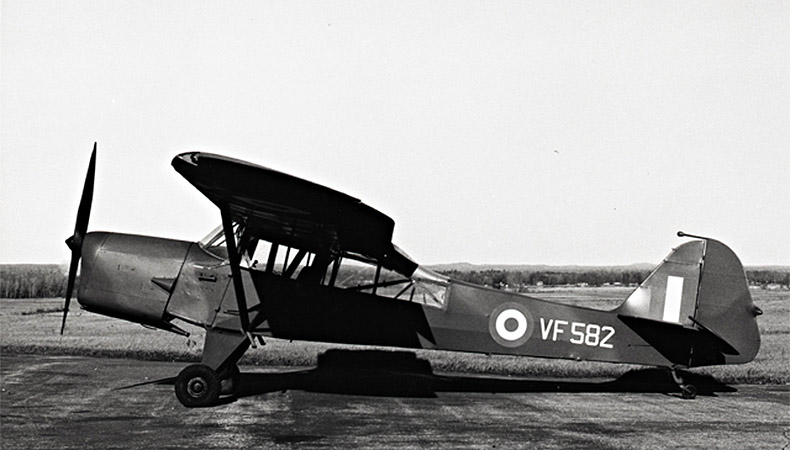 The Auster A.O.P. 6 is a light observation aircraft that was developed from a line of similar machines by the Taylorcraft/Auster company. It was an easily maintained aircraft that could operate from short improvised landing strips in forward battle areas. The Canadian government received 36 Auster 6s in 1948, and 6 Auster 7s in 1951. These aircraft were gradually taken out of service as deliveries of a new machine, the Cessna L-19 Bird Dog, began in 1954. The last Auster was struck off strength in May 1958.

The Museum Auster was taken on strength by the RCAF in 1948. In 1957, the Auster was sold for civilian use, and after passing through the hands of several Canadian owners, was purchased by the Canadian War Museum in 1965. This aircraft was restored by No. 6 Repair Depot, RCAF.

This Auster was manufactured by Auster Aircraft Limited in United Kingdom in 1948. It was taken on strength by the RCAF later that year. In 1957 it was sold for civilian use to Sigurdson Aviation Limited in Winnipeg, Manitoba. The following year it was acquired by F. W. Mohney of Thurso, Quebec. Over the next few years, it passed through the hands of several Quebec-based owners.

In March 1965 the Canadian War Museum bought the aircraft from Garant Aviation, St-François, Montmagny, Quebec. No. 6 Repair Depot RCAF in Trenton, Ontario refurbished it in the markings of a British army aircraft flown during the Korean War by Canadian pilot Captain Peter Tees of the Royal Canadian Artillery. Tees was awarded the Commonwealth Distinguished Flying Cross for directing artillery fire from the air in Korea. The Auster was transferred to the Museum in 1967.