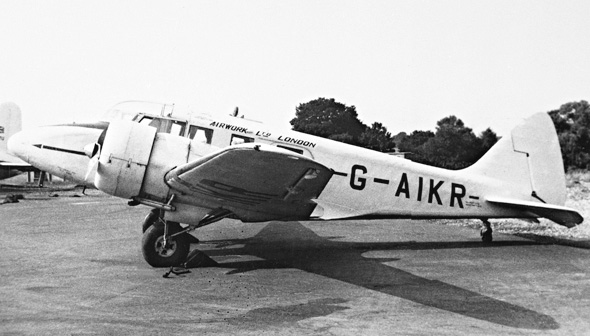 The Consul started life as an Airspeed Oxford, an aircraft used extensively as a pilot and aircrew trainer in the British Commonwealth Air Training Plan during Second World War. Immediately after the war some Oxfords were “civilianized”" by removing wartime equipment and introducing passenger seating.

Airspeed had the reputation of building speedy, light single- and twin-engine transports. The Oxford/Consul was no exception, but was considered by some to be much trickier to fly than the Avro Anson, its stablemate at training schools.

On loan to the Air Force Museum of New Zealand

This Consul was manufactured for the RAF as an Oxford Mk. I by Airspeed Limited in Portsmouth, England in 1945. After brief use during the war, it was resold to the manufacturer for conversion to a Consul in late 1946.

Once converted, the Consul was leased to Chartair Limited in London. In January 1947 it was sold to Airwork Limited in London and flown as an aircrew trainer and for various military contracts. Rapid Flying Group Limited in Coventry acquired the aircraft in 1962.

Deemed no longer airworthy in 1965, the aircraft was sold and shipped to the Canadian War Museum, transferred to Rockcliffe airport, and then moved to the Museum the following year. The Museum had intended to restore the aircraft as an Oxford, to complete its collection of Second World War twin-engine trainers used in Canada, but the project did not go ahead at that time.

In 2000 the Consul was loaned to the Air Force Museum of New Zealand, where it is being restored as an Oxford.