In this colourful monthly blog series, Ingenium’s science advisors offer up three quirky nuggets related to their areas of expertise. For the January edition, they introduce a wildly popular new apple variety, demystify the “twinkling” of stars, and challenge the ethics around DNA modification. The ethics of designer babies

Here’s a question that matters: Is it ethical to direct the evolution of the human body?

In December 2018, Chinese scientist He Jiankui announced he had altered the DNA of two babies born in November 2018, effectively making them the first genetically modified humans. He did this using a ground-breaking new genetic modification technique called CRISPR, which allows scientists to make extremely precise cuts in DNA and insert new pieces in the gap.

In the case of Lulu and Nana — the genetically engineered twin girls from China — He Jiankui used CRISPR to disable a gene involved in the transmission of the HIV virus. In doing so, he aimed to make the babies immune to HIV — something that might have been appealing to the family, since the father was HIV positive. This sounds beneficial…but the experiment has been almost universally condemned by scientists and medical ethics experts for several reasons:

This experiment marks the beginning of the age of human genetic engineering, which opens up new ethical, social, political, and economical questions. For instance: is it ethical to fundamentally change an individual (and all of their future descendants) without their choice? Is it worth it if it means eliminating all genetically inherited diseases? Should parents be able to choose a baby’s sex? Is genetic engineering really that much different from cosmetic surgery (and where do we draw the line)? What about cost; if the procedure is expensive, could we end up creating genetically distinct — rich and poor — species?

Ultimately, engineering is about making people’s lives better, and genetic engineering is no different. But this kind of science if moving much faster than the regulatory mechanisms and ethics boards that govern it. It’s important for us to understand these technologies and their implications, and decide how we feel about it now — while we still have the opportunity to shape the regulations that control it. Cosmic Crisp™ is the trademark for the variety WA 38

There’s a new apple in town (and it won’t break the bank)!

With its own website, trademark, and touring theatrical production it seems everyone is talking about the Cosmic Crisp apple. Advertised as extremely sweet, crisp, and with a better shelf life than any other apple, it’s touted as serious competition to granola bars and other sweet lunchbox treats. But it might be a while until Canadians can be made believers; the Cosmic Crisp is currently grown in limited quantities, in one single location — Washington state. Despite this, all over social media and the news, the hype is tangible.

This begs the question, why are we getting so excited about a new apple? Most of us are oblivious to the variety names of our food crops. We simply know grapes by their colour — red or green — and we’d be hard pressed to name the banana found on international markets (it’s the Cavendish). But oh, apples! Honey Crisp, Jazz, Sweet Tango, to name a few of the new ones out there, are all recognized and often sought out over the more “standard” apples of yore (like the good ol’ McIntosh).

Apple varieties were traditionally developed from those growing in the wild, or by cross-breeding varieties we already grew. Because of these varieties’ genetic histories — and pressure to bring out traits other than fruit quality, such as longer shelf life — multiplying the trees responsible for the “old school” varieties over decades reduced the quality of the fruit. That is how we got the mealy and bitter red “ex-delicious,” and the super sour McIntosh.

In come new, juicier, and tastier varieties, largely developed through privately-funded breeding programs with customer preferences and tastes at the forefront. This is in contrast to government-led, publicly-funded breeding programs which may be guided by other priorities, such as environmental sustainability of production and improving older staple varieties to make them more resilient to climate change. Both have their place, but the winner of customers’ hearts seem to be the fruit tailored to their taste buds — even though they come with a higher price tag.

Taking 20 years to develop, new varieties of apples require a huge investment of time and money, which explains why commercial releases of new varieties are often supported by extensive strategic marketing campaigns. By making space in the market for a new arrival, breeders can ensure they recoup on their investment.

So is the Cosmic Crisp really the apple to end all apples – the embodiment of our wildest Malus domestica fantasies? Or is it marketing hype? We will see once this newbie hits the Canadian market in the coming years, to much fanfare, surely! Out of the millions and billions of stars observed, only about 150,000 of them are known as variable stars.

Looking up at the night sky full of stars is part of the human experience. If you look closely enough, you’ll notice that all the stars appear to be twinkling — ever so subtly changing their brightness, flickering, or blinking — it’s beautiful!

But in reality, stars don’t twinkle! Or, perhaps a better way to say it is the stars themselves are not twinkling. Almost all stars are very static; they don’t change their brightness for millions of years. The twinkling we see is caused by our atmosphere.

Our atmosphere is a 100 kilometre-thick layer of turbulent and chaotic gas enveloping Earth. Starlight travels incredibly far through the emptiness of space, but before it can get to our eyes, it must first travel through our atmosphere. The turbulence of the air slightly bends and twists each star’s beam of light, causing what appears to be twinkling — or scintillation, as scientists call it. Surprisingly, that means that if you were above the atmosphere, like, say, an astronaut on the International Space Station, the stars would not be twinkling to your eyes.

Variable stars have been incredibly useful tools in learning about the universe. They teach astronomers about the sizes of stars, how they’re working inside, what they’re made of…even how far away they are. So while not all stars are actually twinkling, the ones that do can tell us a lot.

As a passionate science communicator, Jesse Rogerson loves promoting science literacy to the public. He frequently represents the Canada Aviation and Space Museum on television and radio, social media, and at conferences. A trained and practicing astrophysicist, Jesse holds a PhD in observational astrophysics from York University, and publishes his research in peer-reviewed journals. Jesse enjoys riding his motorcycle, board games, and ultimate frisbee. 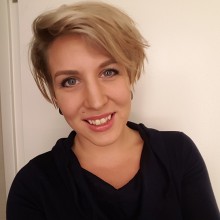 Renée-Claude is the Science Advisor at the Canada Agriculture and Food Museum.