Photo Credit
Library and Archives Canada
William Avery Bishop in a Nieuport aircraft, circa 1917. At this time, Bishop would have been a full-fledged pilot and able to fly alone.

William Avery “Billy” Bishop is one of Canada’s most famous airmen of all time, and probably the most well known to come out of the First World War.

A common myth surrounding Bishop is that he was the one responsible for downing the famous German ace Manfred van Richtofen, also known as the Red Baron, although this has never been proven. However, Bishop was responsible for many other great feats throughout the First World War which earned him not only the Victoria Cross for acts of bravery, but also the Companion of the Order of the Bath, Distinguished Service Medal and Bar, Military Cross, Distinguished Flying Cross, and the Canadian Efficiency Decoration. In fact, the only Canadian airman more decorated than Bishop is William George Barker, who also fought in the First World War and received the Victoria Cross. Taken in 1914, this photo shows a young Bishop during his time as a cadet at the Royal Military College in Kingston, Ontario.

Bishop was born on Feb. 8, 1894, in Owen Sound, Ontario. The oldest of three siblings, he is noted as being quite the marksman at a young age. When the First World War broke out in 1914, Bishop was a cadet at the Royal Military College in Kingston, Ontario. He was first stationed with the 9th Mississauga Horse of Toronto — a cavalry unit — but before he could deploy overseas, Bishop caught pneumonia. The illness ensured he was left behind as the rest of the Mississauga Horse went off to England. Once recovered, Bishop joined up with the 7th Canadian Mounted Rifles and traveled to Europe in June 1915.

From the trenches to the skies

The trench warfare of the First World War was notoriously dreadful. Many soldiers suffered through diseases like trench foot, which occurs when your feet are subject to damp conditions for a prolonged amount of time. After a month in the trenches, Bishop decided the conditions weren't for him; he applied for a transfer to the Royal Flying Corps. Since the transfer was quicker to become an observer rather than to become a pilot, Bishop applied to be an observer.

Bishop began training with the No. 21 Squadron as an observer in training in September 1915. However, after training for just a few months, he was sent back to Canada to recover from non-battle related injuries. Ever determined, Bishop knew he wanted to become a pilot. Eventually, Bishop was chosen for pilot training and, after completing his training, he was assigned to No. 37 Home Defense Squadron (stationed at an airfield in England). In March 1917, Bishop returned to the front, where he was posted to No. 60 Squadron in France. By the end of April 1917, Bishop had already been credited with downing 14 enemy aircraft. Returning to England in May, Bishop took a break before returning to France to undertake the mission that would earn him the Victoria Cross. A portrait of William Avery Bishop, created by Australian painter James Peter Quinn. The painting is part of the collection at the Canadian War Museum.

Bishop and Albert Ball, another exceptional Canadian airman, had planned the mission together. They were to attack a German airfield early in the morning, but with Ball having passed, Bishop couldn't find anyone else willing to fly with him. Bishop decided to fly the mission solo.

On the morning of June 2, 1917, Bishop flew alone to an enemy airfield near Cambrai, France. Here, he found seven aircraft on the ground; he was able to destroy one as it was trying to take off and he downed another while it was 60 ft. in the air. Bishop did all this while being hammered by enemy machine-gun fire from the ground. At 1,000 ft. in the air, he was engaged by another aircraft that had successfully managed to take off; Bishop was able to down it before returning to friendly territory. The London Gazette published an article on Aug. 11, 1917, summarizing Bishop’s act of bravery.

“Two more machines then rose from the aerodrome. One of these he engaged at the height of 1,000 feet, emptying the rest of his drum of ammunition. This machine crashed 300 yards from the aerodrome, after which Captain Bishop emptied a whole drum into the fourth hostile machine, and then flew back to his station.”

After the First World War, Bishop enjoyed civilian life with his wife, Margaret Burden. The two moved to England in 1921, where they had three children. In 1929, the stock market crash crippled their finances, prompting a move back to Canada. For a brief period, Bishop and William George Barker went into business together. The pair created Bishop-Barker Aeroplane Limited — intended to be a passenger service — but ultimately the business failed. When war once again overtook Europe, Bishop made a return to the military. He was appointed Honorary Group Captain in the Royal Canadian Airforce in 1931, then Honorary Air Vice Marshal in 1936, and finally Honorary Air Marshal in 1938. As Air Marshal, Bishop helped greatly with recruiting for Canada.

Bishop was a living legend of his time, and remains one of Canada’s most esteemed wartime heroes. On Sept. 11, 1956, Bishop passed away while on vacation in Florida. He was 61. 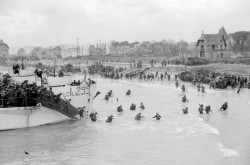 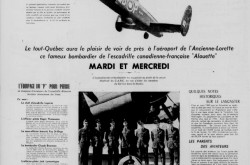 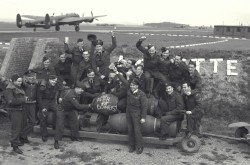 A somewhat forgotten aspect of the history of No. 425 Squadron (Alouette), Part 1