Let me begin by hoping that the title of this article will not offend any individual involved in the development of the vehicle at the heart of it. The SHARP programme was a truly remarkable achievement, as can be seen on the cover of the January 1988 issue of the American monthly Popular Science.

Communication satellites have revolutionised the world we live in. Sadly enough, these technical wonders are extremely expensive and difficult to repair. Communication towers are a lot cheaper to build and maintain but their effective range is very limited. Would it not be nice if some sort of intermediate technology could be developed to fill the gap? The truth is, this technology does exist and was studied from the late 1950s onward. Better yet, Canadian engineers played a significant part in this research. The type of unpiloted aerial vehicle we are looking at here has been known by various names over the years, some of them official, others more informal – from High Altitude Platform Station to poor man’s satellite.

The basic idea for what became known as the Stationary High-Altitude Relay Platform (SHARP) was conceived around 1980, in Ottawa, Ontario. The goal of the researchers was to develop an unpiloted aerial vehicle able to fly at high altitude (21 000 metres / 69 000 feet) over a specific area of the Earth, for months on end, in order to serve as a relay station for wireless telecommunications and broadcasting services. This vehicle would provide communications services at a fraction of the cost of a satellite.

Uncertain of what such an unpiloted aerial vehicle would look like or how it would it would get its power, the federal Department of Communications contracted SED Systems Limited of Saska­toon, Saskatchewan, to conduct a study, in 1981. As part of this contract the latter may also have worked on the choice of power sources. Work on the most appropriate configuration of the vehicle was done in Ontario by a University of Toronto Institute for Aerospace Studies (UTIAS) team led by Dr. James Duncan DeLaurier.

It should be noted that DeLaurier was later involved in the development of wing flapping flying machines, or ornithopters. Working in cooperation with Jeremy M. Harris, he designed the Great Flapper, a powered and piloted ornithopter completed in 1996. Development of this unique flying machine proved to be extremely challenging. In early July 2006, the Great Flapper’s pilot, Jack Sanderson, flew a distance of approximately 300 metres (1 000 feet). This 17 second flight, made possible by the installation of a miniature jet engine, was, as of early 2018, the longest ever achieved by a piloted powered ornithopter. And yes, the Great Flapper is now part of the collection of the Canada Aviation and Space Museum, in Ottawa. But back to our story.

Given the limitations of solar cells for a northern country like Canada, the researchers chose to power the electric motor of their vehicle with microwaves emitted from the ground by an array of antennas. CRC researchers spent a great deal of time developing the thin, small and light receiving antennae, or rectennas (RECTifying antENNA), that received these microwaves – a key element in the development of any microwave-powered machine. Others worked on the ground-based microwave generation and transmission system. Miller Communications Systems, an electrical engineering company, also worked on the SHARP’s microwave power transmission system. As well, it developed a demonstration transmitter and antenna system.

The UTIAS team was responsible for the development of the actual vehicle. It looked at and rejected a few options. A helicopter would have had weight problems. While a balloon or airship offered certain advantages, the team came to favour an airplane-type platform. The rectennas and electric motor with its propeller would account for most of the SHARP’s weight. Back then, it was thought that the vehicle might reach its cruising altitude behind a tow plane or underneath a balloon. At first, it might stay up for 2 or 3 months before coming down for a check up. Later on, the SHARP might remain aloft for an entire year.

In any event, the end result of all the research was a well thought out system. An array of small dish antennae would send microwaves to the SHARP as it flew a circular course, regardless of the wind’s strength. The huge machine would have a broadcast range of 500 to 600 kilometres (300 to 375 miles) – more or less the width of one of Canada’s western provinces and 20 times more than a typical communication tower. Even though an onboard computer would fly the SHARP automatically, it would be possible to control the vehicle from the ground, using the microwave beam to carry the command signals. The top of the fuselage and wing would be covered with solar cells, while the bottom of that fuselage and wing would be covered by microwave-receiving rectennas. The solar cells would power the SHARP at launch time and help charge the onboard batteries. These batteries would power the communications system for a while if the microwave beam was lost.

A SHARP system could provide communications services for a fraction of the cost of a satellite. While such a satellite might be expected to function about 10 years, a SHARP could come down to Earth at any time for maintenance, repairs, replacement or upgrades. The use of a few SHARPs rather than a single satellite would also increase the flexibility of the system. More users could use the same frequencies without interference.

While the advantages of the SHARP for a huge country like Canada were obvious, developing countries could also find it very interesting. Indeed, it could provide service to areas over which satellites did not operate. As well, a SHARP could be fitted with a radar set to keep an eye on Canada’s 200-nautical mile (370 kilometres / 230 miles) exclusive fishing zones, to see if foreign ships were fishing there illegally. The SHARP could also be used for remote sensing or environmental monitoring (acid rain or climate change).

Yours truly is of the opinion that this is probably enough for today. I know how disappointed you are, my reading friend, but you will have to wait until next week for the second part of this article. 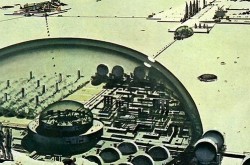 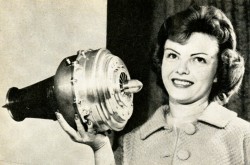