A creative summer camp program may have nudged young participants into considering a future career as an aircraft accident investigator.

It all began when Jared Smith, a programming assistant with the Canadian Aviation and Space Museum, contacted Beverley Harvey from the Transportation Safety Board (TSB) and asked her for some advice on how to set up an aircraft accident scenario. The aim behind this scenario was to expose children, who were going to be attending the SONART summer camp at the museum, to various sorts of careers in aviation. Jared wanted them to learn by doing, instead of by being lectured to.

The role of aircraft accident investigator was one career being showcased at the camp. Jared needed a realistic scenario that was interesting, not too frightening, easy to set up and dismantle, located outdoors (but transferable to the indoors if weather was poor), and doable within an hour. Bev Harvey recommended the Canadian Armed Forces Directorate of Flight Safety (DFS) as a flight safety resource, having spent some time with DFS during an annual investigator training exercise. As a result, DFS had the opportunity to promote flight safety in a rather novel way.

The collaboration between the museum, TSB, and DFS led to the development of an exercise involving a rusty, distracted, pilot having to take drastic measures with their Volksplane to avoid a drone while landing at the Rockcliffe airport. Staff from all three organizations worked together to bring this scenario to life. The children were voluntarily divided into two teams: the Human Factors specialists whose role was to interview the pilot, and the Technical team whose role was to inspect the wreckage. A group of children inspect and measure the tail of the plane.

The children had to discover the cause of the accident through observation and by asking questions. The sudden arrival of a “drone operator” who was searching for their missing drone was often played by a very enthusiastic child from the camp. If Hollywood is needing someone to audition, we know a few potential candidates!

Speaking of candidates…we now know where our future accident investigators are going to come from! The children were fantastic. They were curious, enthusiastic and engaged. They thoroughly used the Crash Scene Hazard Management matrix to determine the potential hazards at the crash site. They cordoned off the site, to ensure bystanders were kept safely outside the perimeter and to preserve the evidence within. They informed the pilot that they were there to figure out the cause of the accident not because they wanted to assign blame, but because they wanted to prevent future accidents.

The Human Factors team asked the pilot pertinent questions like:

The Technical team even deduced that the engine was functioning because of the physical damage attributed to a turning propeller (their science teachers should be proud). They also wanted to know whether the missing wings had anything to do with the crash…post-accident over-zealous aircraft maintainers were assigned cause for that one. A group of children huddle around a collection of notes on a whiteboard.

The discovery of a drone lodged in a nearby tree and the arrival of the distraught drone operator always created a bit of a buzz (pardon the pun). It also formed the basis of an excellent conversation about safety and Transport Canada’s drone operating rules…especially the one that says you should not operate a drone within three nautical miles of an airport [1]. A white drone with broken propellers sits on the grass beside an evidence marker.

Overall, the exercise was a great opportunity for DFS to share the flight safety message and to showcase our profession to our future replacements. We would like to thank Jared Smith and the museum staff, and Bev Harvey from the TSB for this fun and educational opportunity.

Fly safe and eat your breakfast — our youth are watching you! 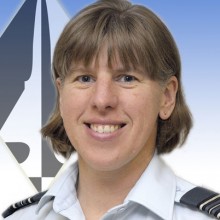 Major Claire Maxwell has served with the Canadian Armed Forces for 23 years and is the editor of Flight Comment, the flight safety magazine for the Royal Canadian Air Force. A pilot by profession, Major Maxwell has flown the Griffon helicopter in both a search and rescue and tactical role.